« Back to Learning Center

Why is new concrete more likely to settle?

Concrete settling is most likely to occur within the first 5-10 years of your home being built, but why is this the case?

Have you noticed your newer concrete start to settle or sink? Concrete is most likely to settle the most in the first 5-10 years after installation, and there’s a good reason for this.

A-1 Concrete Leveling has been lifting sunken concrete slabs for more than thirty years, and during this time we’ve seen thousands of cases of newer concrete settling and causing trip hazards.

This article will dive into the general causes of concrete settling, discuss why new concrete is more likely to settle, explain why some settling is unpreventable, and provide a couple of ways to combat concrete settling.

Why does concrete settle in general?

Because concrete is only as good as the soil it’s sitting on, the base under your concrete slabs needs to be in good condition in order to maintain a level surface.

The following factors impact the integrity of the base of your concrete, and can cause settling:

When concrete is poured over loose soil or sub-material that hasn’t been properly compacted down, it will likely settle over time as the soil naturally settles.

Water is one of concrete’s biggest enemies, as it can wash away the sub-material and soil which causes voids under the slab that lead to settling.

Similarly to water eroding the base that concrete is sitting on, if animals like chipmunks or other pests make a home under your slab, they will create voids that will cause settling over time.

Because soil settles naturally as it expands and contracts with rain and freezing temperatures, among many other things, concrete can simply settle over time.

Why is new concrete more likely to settle?

If you’re placing new concrete around a house that’s just been built, or cutting out old concrete and replacing it, so much of the soil and sub-material where the concrete needs to sit will now be disturbed and loosened.

This is especially common in new construction, where the soil around a house has been completely dug out and moved around in order to build.

We see this very commonly in many locations around newer homes, but the area where the driveway meets the garage is typically a huge settling point, as the soil up against the house usually cannot be compacted properly when installed.

If you are considering new concrete, rather than replacing it and disturbing the soil, concrete leveling is an alternative that lifts the already-settled slabs on top of the materials and base that have already had the necessary time to settle out.

In the case of new homes or new concrete being placed on non-compacted soil, settling is likely inevitable and there’s not much to do but wait for it to run its course, which can take up to 10 years.

For example, when building a house, you have to dig holes in the ground wider than what your basement walls will actually be, then backfill these holes once the walls are installed. This creates one area of non-compacted soil that will take a long time to settle out.

To “beat” settling, in this case, you could build a house but not put down concrete for the first ten years, letting the soil settle and compact itself naturally. After this time period, if the soil hasn’t been redisturbed, then the concrete can be added without a large fear of settling.

For most people, this is highly unrealistic. When building a home, you want nice concrete that not only looks great but functions how your family needs it to. Sometimes there’s nothing to do about unpreventable settling.

How can you combat settling?

As mentioned above, sometimes concrete settling is unavoidable. However, void filling and concrete leveling are two ways to combat it.

If over time you notice voids forming under your concrete slabs, it’s important to fill them. This can be done with topsoil if they are just starting to form, but hiring a professional to fill them can be a big help.

Concrete leveling works by filling the voids under the concrete with a strong compound that forms a sturdy base for the slab to sit on.

If your concrete is settling and you don’t know what to do, the answer is likely not replacement. In fact, replacing your concrete will likely make the problem worse, as the soils get disturbed and you’re stuck with settling concrete down the road again.

Leveling your concrete is a better alternative, as it creates a stable base for the settled concrete to sit on top of the soil that has already had the necessary time to settle.

If you’re considering replacing your existing concrete or installing concrete around your newly-built home, you now know there is a high chance that it will settle within the first 10 years.

With this in mind, you can make the best decisions for your home with regard to installing new or leveling your existing concrete, and be prepared for unpreventable concrete settling.

If you have a settling section around your home, or just want to talk to an expert, click the link below to request a free consultation and concrete leveling estimate!

Want to know more? Check out the following topics from our Learning Center: 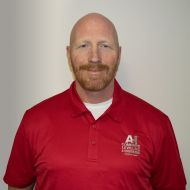 Jeff is the owner of A-1 Concrete Leveling Akron-Canton. He is often out about town doing estimates, or just as frequently on a job helping the leveling of foundation crews complete their work to the quality that customers expect.